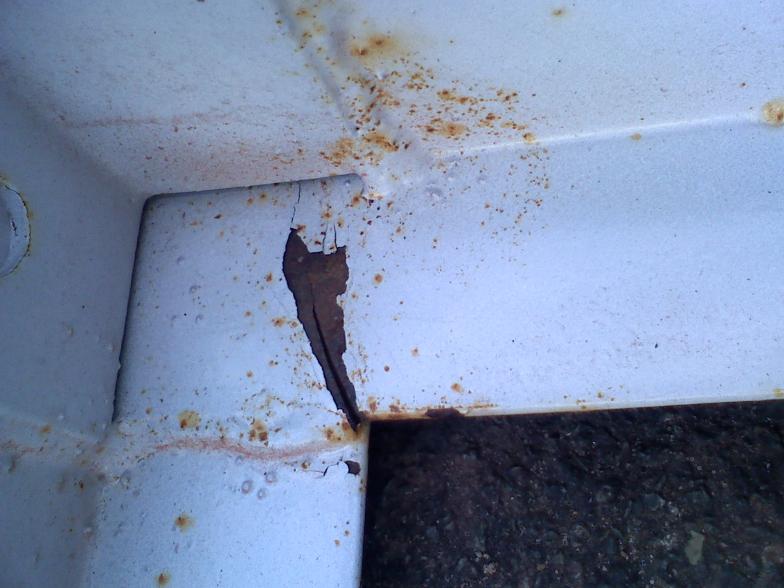 Crack on weld on competitors bracket Badly installed motorised dish with typical weak (2.5mm thick) brackets supporting a long pole over a roof. The pole itself was also too weak  so this world have been worse had the pole not flexed as well taking stress off the bracket & dish.-  except the dish would have moved in the slightest wind losing the satellite. We install special strengthened brackets for over the gutter & over the roof installations  that keep the installation SMALL -& strong and spread the load over the brickwork. to handle winds of 100 or 125mph.

This bent pole used to hold a 1m motorised satellite dish over a roof. We found this in the grounds of a property while re-installing a motorised dish ... when we asked what it was, it turned out a previous installer had actually used it to hold a 1m motorised steel dish over a roof / gable end.  The pole was about 1-2mm thick & totally unsuitable for satellite installations - our poles are usually 2" diameter & 4-5 & 6mm thick steel or high tensile alloy for such a job & far better supported to take up to 100mph winds & above. Not only was it potentially very dangerous & could have caused injury to the owner ot passer by when it went or damaged the property, It damaged the dish, had damaged an expensive Italian STAB satellite motor and caused the cost of a new installation by us. We re-installed it professionally using the correct equipment. 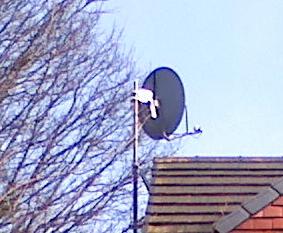 UPDATE 3 years later we were called back to the motorised install, it only turned out that a broadcaster had ceased broadcasting but still had the channel shown on their website & in trying to receive the channel that had ceased transmission the settings had simply been altered & required a simple reset without going near the dish over the gable end. What was pleasing for us was that after 3 years of some of the worst storms & high winds on record & a very exposed installation over a gable end- the motorised dish we installed right over the exposed gable end was perfect- it couldn't be altered to improve it.  It's always nice to see but we have motorised systems that have been up for a lot longer & never touched once installed. Customers can take it for granted as the motorised works daily (which is how it should be) & can't compare it to a poor install that, like their previous failed installations, that failed in strong winds & had to have several call outs & costs in that time plus in their example, the costs of a damaged ,expensive Stab motor & damaged dish & 2 x reinstall costs etc... The costs savings in the long term of having it done properly 1st time would have saved about £700 to £1000 including time off work for the installations. 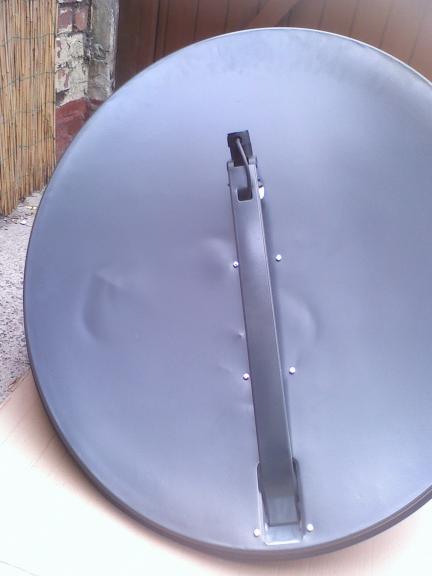 Yet another satellite dish bent by cheap/ poor mail order/ shipping &/or bad handling. This is far too common -  a dish bought by mail order or on ebay by a customer with free or cheap shipping or a stockist that treats them like bags of potatoes, arrives like this, even though their tolerance on that all important dish face is <0.5mm [ideal] & <2.3mm [absolute maximum] before they start to lose power & at the same time start to drag in noise & quickly perform worse than a smaller dish that has been properly handled. Dishes are difficult to ship & need special handling throughout & why we prefer to supply our customers direct from our trade supplies [& we still check all dishes for any handling/ shipping damage!].  The top performance of any satellite system relies on so many stages all being done to a professional level 'at every stage!' - the last thing you want is to start with a bent / dented dish. When we find this sort of thing with dishes [not supplied by us!], we can often take the dish to one side to bring it back up to tollerance rim to rim, but by far it's better to never let it happen in the first place.

A 1.05m steel satellite dish mounted on a 4m x 2mm wall Aerial pole. We actually see & sort out lots of these - this was a good example of a bad example- I climbed the ladder & put out my little finger & gave the 4m long pole with 1.05m steel dish & motor a light push moving it 6-8" easily.  It was also crushed on all U bolt clamps on the brackets & motor to pole making it impossible to attain a very accurate alignment & to retain one in strong [or moderate in this case] winds as the clamps cannot be tightened enough. The 3 brackets used would not have helped. Looking down the length of pole it had already bent in the area between the top bracket & the motor clamps & could have resulted in the same damage as the above bent pole example & the damage & costs that caused.

Corroded satellite f connectors These are typical of badly sealed outdoor satellite f connectors where water has got in & not only caused corrosion but also caused chemical reactions with the 13v/18v DC voltage shorting through the water.  These are the cheapest f connectors with no additional sealing ring - they were found loose but over sealed with self amalgamating tape that should have protected the joint but failed and allowed water into the joint- possibly because the tape was also the cheapest &/or the joints were loose. 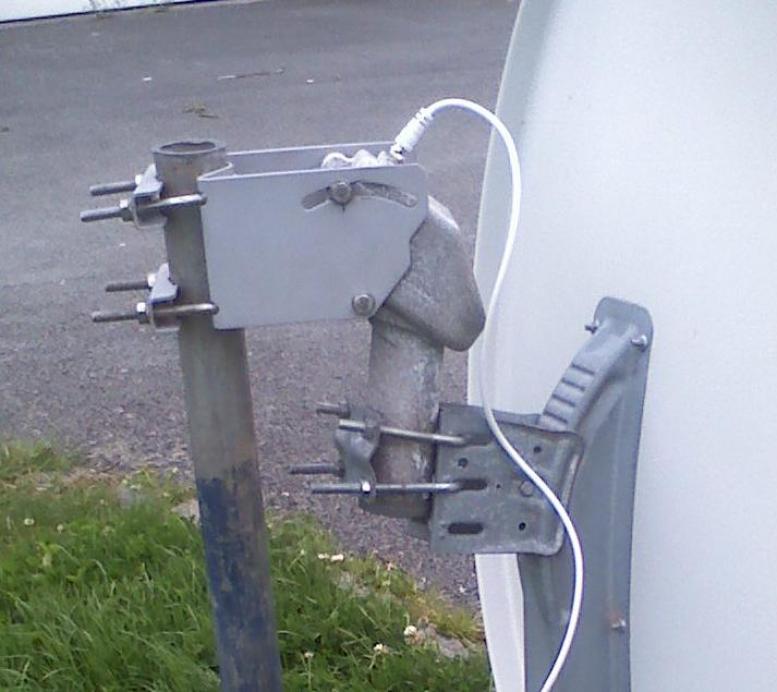 Satellite motor fitted ....upside down. Always expect to meet one or two of these. This is an Italian STAB HH100 motor - it looks similar to other diseqc motors except it is fitted the other way up along with it's bigger brother the HH120. Almost missed the fact that it was upside down at the first glance - brought a smile though... & you could kid it on to work properly that way up if you really wanted by swapping latitude settings in the receiver from north to south or visa versa if using USALS (& sealing the f connectors & sealing existing & adding new drain holes). 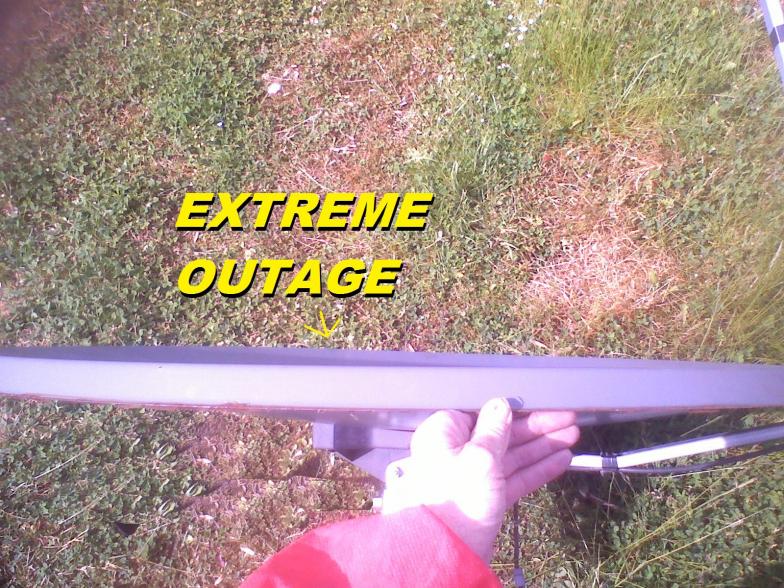 Extreme rim to rim outage. This level of outage (20-30mm) not only causes signal loss, it also causes noise / interference to be reflected into the LNB on the front of the dish causing a lower signal AND a higher noise  figure-  We carry equipment to straighten most damaged dishes and bring them back into tolerance which can result in substantial gains on weaker satellites & better HD picture quality under certain circumstances, particularly where an STB is relying more on cheaper chip sets & clever software to still deliver a HD or SD picture.... [of sorts]. 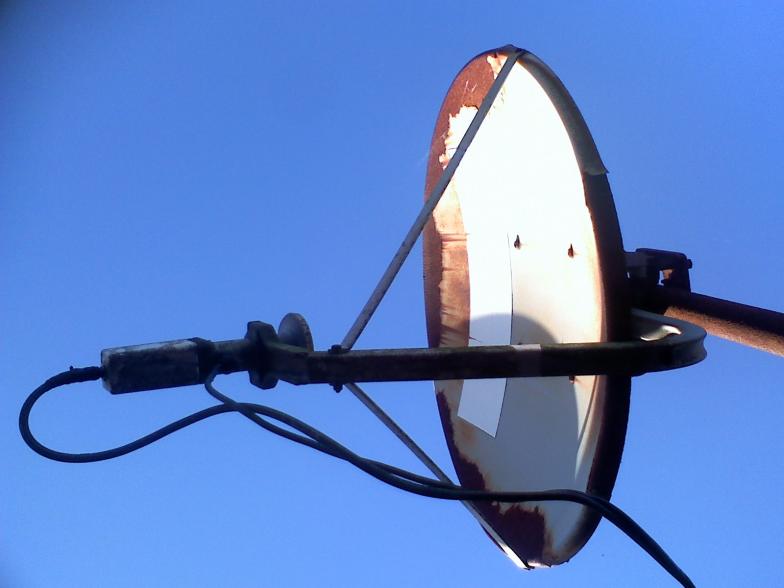 A very early SKY dish  This was an original Sky 60cm dish we had to remove before installing a new motorised.  It turned out to be 70cm+, had a single frequency LNB with the equivalent to a polarotor to flip from horizontal polarization to vertical by mechanically turning the single antenna & measured by the resistance on a potentiometer-  The whole rusty assembly including the steam pipe it was mounted on weighed over 20kg- as much as 2 modern 1m  or nearly 3 85cm installations.  Significant is the excessive rusting compared to our dishes that have multi rust proofing coats over galvanised steel- however - we do like the solidness of the older dishes & the feed support arms... what progress. 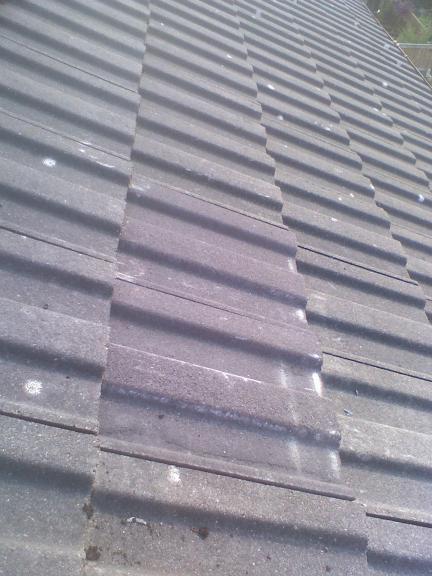 Broken tiles found on roof left by a roofer & dangerous debris just left - repaired by our satellite installer FOC.  The 2 tiles were only £2.73 picked up at a local builder's merchant, a few minutes & a 30+ years of building industry know how by our installer saved the customer £100s & a lot of distress. 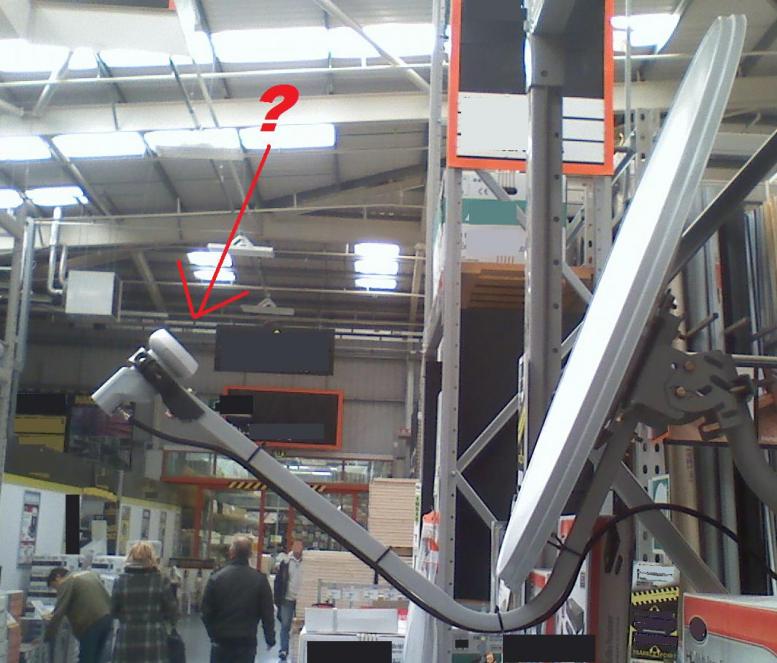 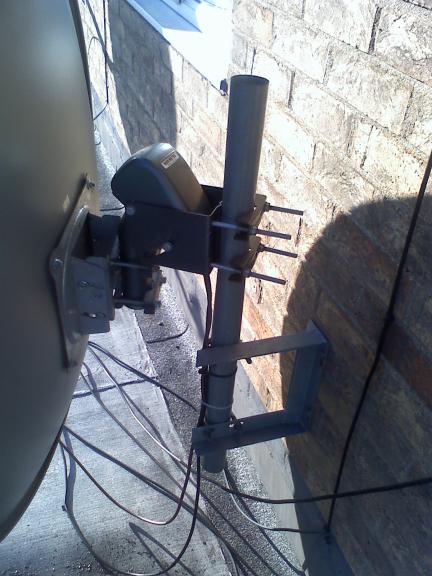 1.1m Dish on an aerial bracket & pole on a wind swept pub roof - A very wobbly effort & on such an exposed site ... the 1.1m dish was a poor offering too overall - it did have feed support arms - just poor ones & the AZ/EL mounting was of a poor design but the motor was a good choice. 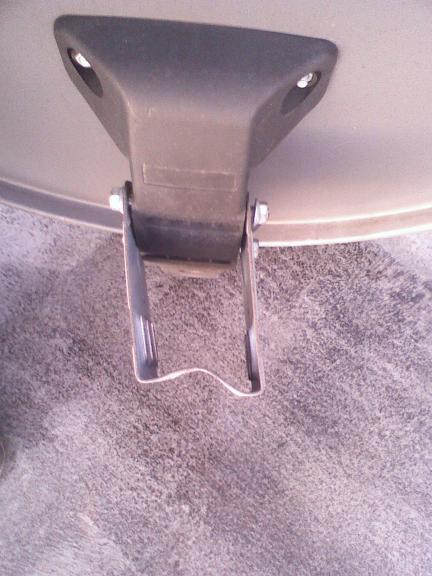 Rhomboidal AZ/EL Speaks for itself 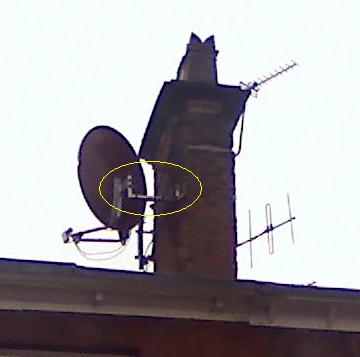 big dish on small  bracket on chimney We would not accept that - chimneys persish from the inside due to corrosive flue gases & should be installed on with far more care with special brackets & strengthening etc.. 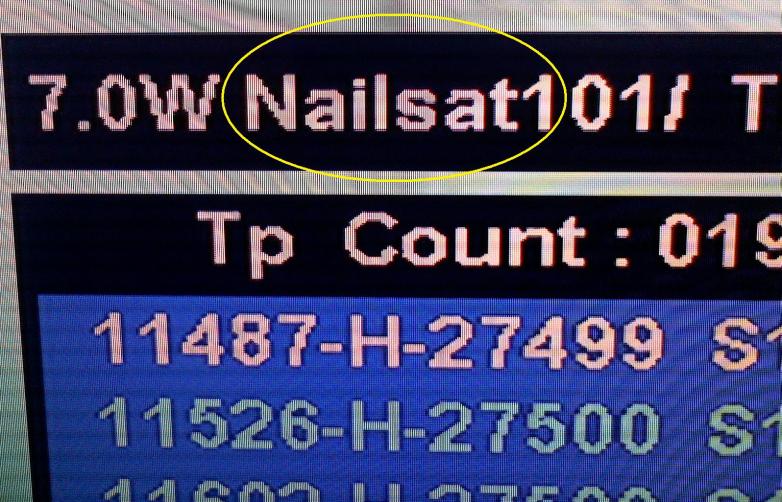 NEWS FLASH- New Satellite discovered (on a Phantompatch) Glad someone's paying attention!   (they were planning on renaimng them all NileBirds at one point .. but Eutelsat stepped in with a far better renaming plan for their's Eutelsat 7 West A ) 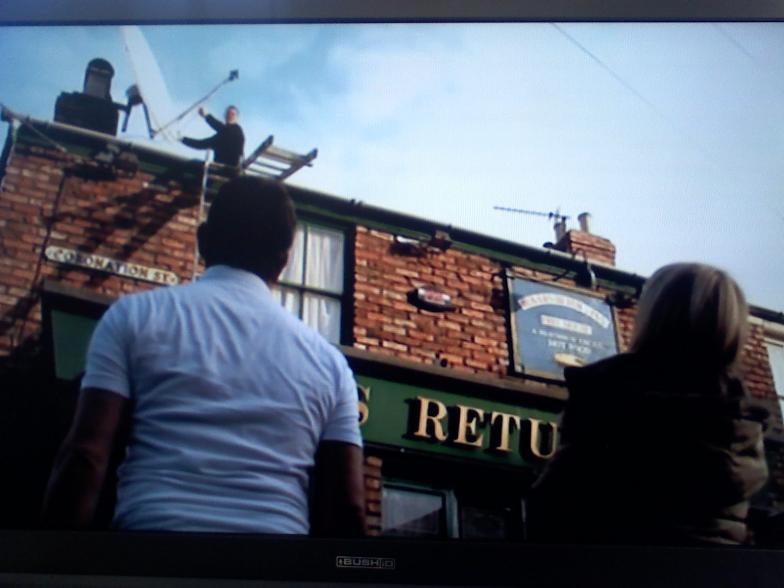 That BIG dish on the Rovers Return. It was a Gibertini 1.5- -stuck on a chimney  sold on, on Ebay.. 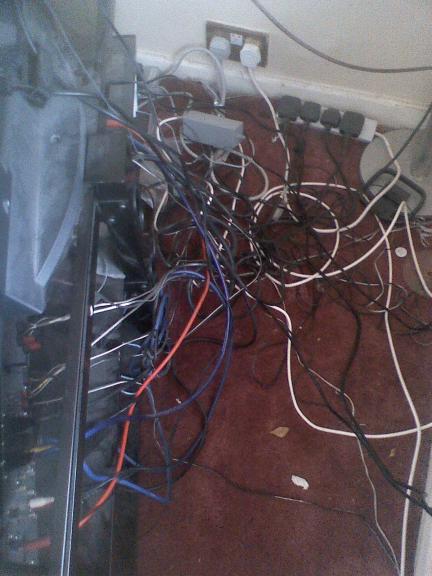 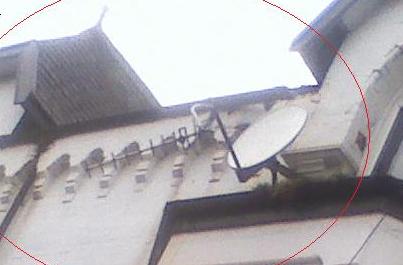 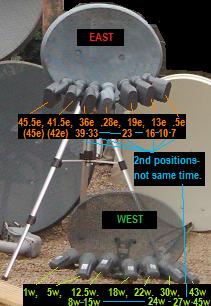 What to do with left over LNBs from Quad +conversions. This was just done for fun originally with the mountain of spare single LNBs left oover after + & multiroom conversions, but you might be surprised to learn that some of the LNBs functioned quite well & the  maximum spread on a sky zone 1 dish is about  40 degrees! With knowledge of waveguide & feed-horn design we can fit satellite combinations like 28e 13e & 5w and many combinations between  these for stronger satellites for very discrete multi LNB options with lower but often quite acceptable signal levels. 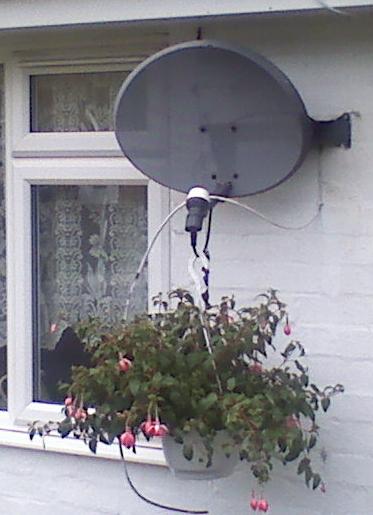 We thought this was a cute use of Sky dish- some might say a better use for one. 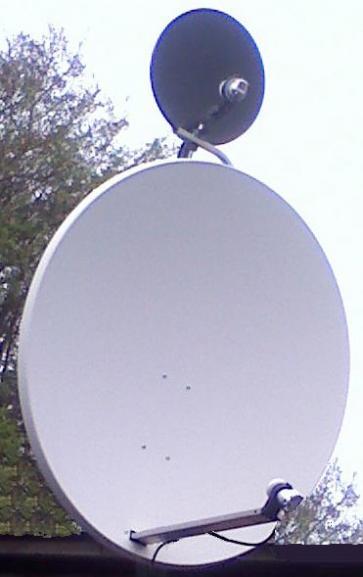 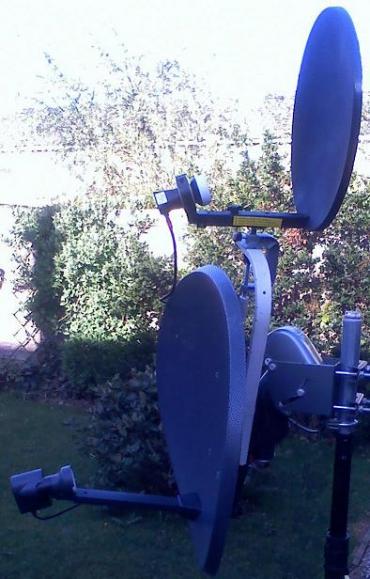 Examples of dishes piggy backed on an existing motorised dish-  to the left is a 1.1 & right a z2 motorised. This little 39cm camping dish tracks the arc perfectly and still receives over 30 satellites & 4-5000 channels.  On it's own purplesat.com motorised tripod mount it is faster to setup up than a conventional fixed camping dish. 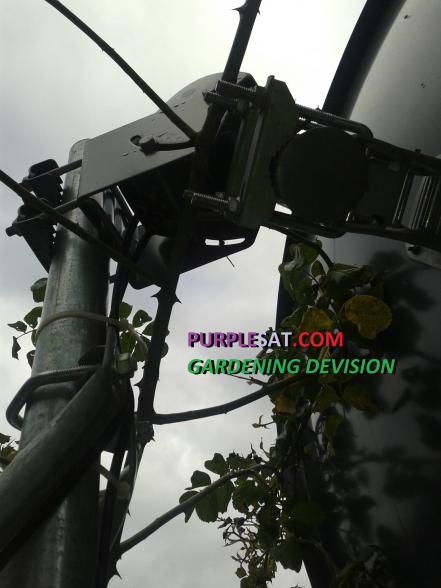 A tenacious climbing rose growing through a motorised satellite motor brackets [still in use] Sometime satellite installation & servicing work includes a bit of gardening & lumberjacking as well as building maintanance. 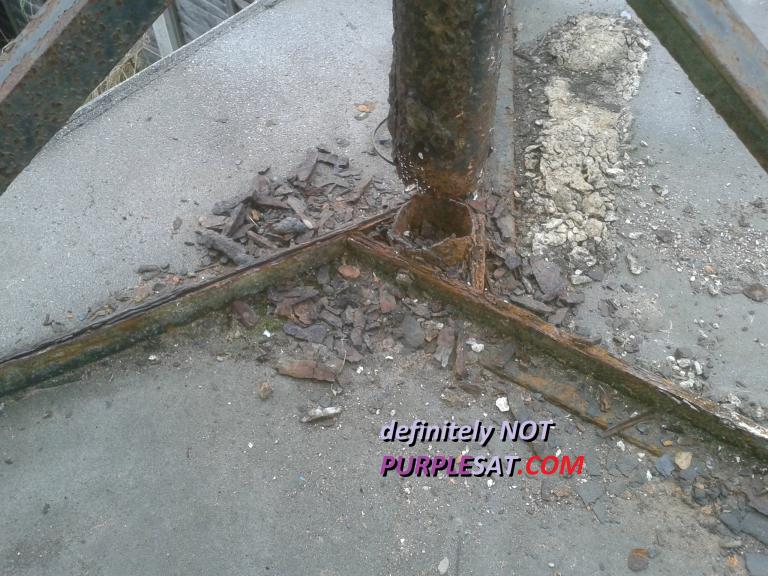 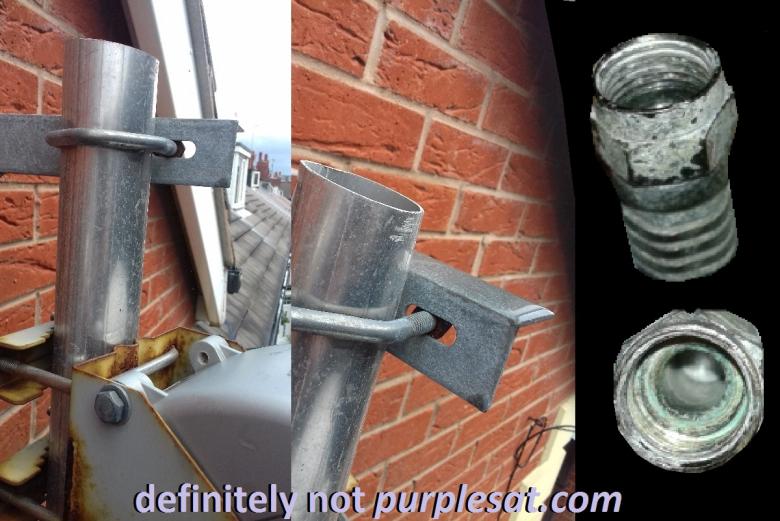 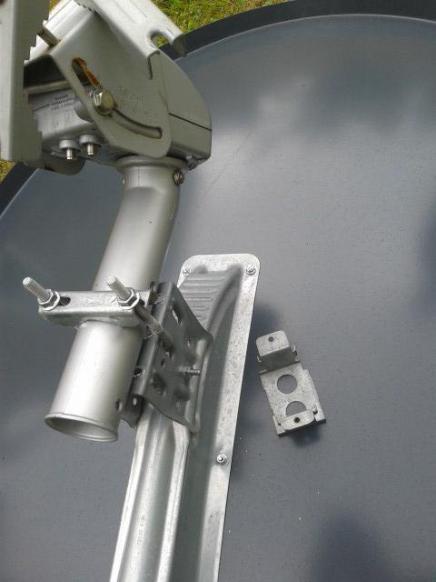 yet another poor satellite motor install & missing brackets We followed another satellite installer round London leaving that lateral brace bracket out of the Triax AZEL [presumably as they are so difficult to install] but in this case the c lown had left other parts off too leaving it with 1 6mm bolt & U bolt holding the steel 1,1m dish up waitung for a real dissaster when a strong wind hit let salone the poor performance tracking the sarellite arc would give. 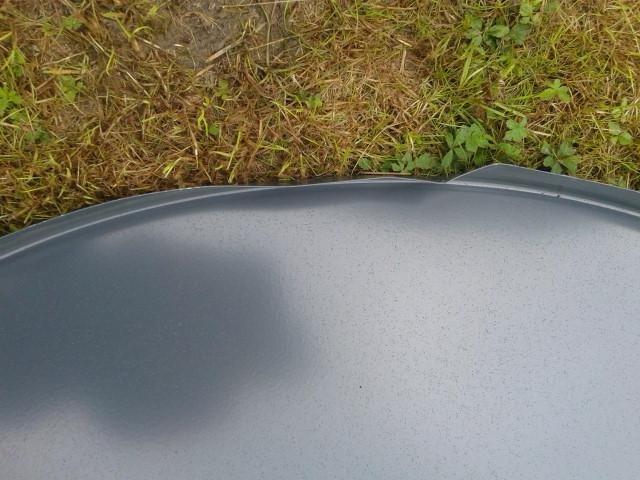 bent dish still installed by an installer  Care of equipment is vital, this looks like damage an installer caused & yet he still installed it - the damage was worse from the side - buckled not only losing signals but adding to noise levels causing a tip over effect & rendering it useless for the weaker signals it excells at. 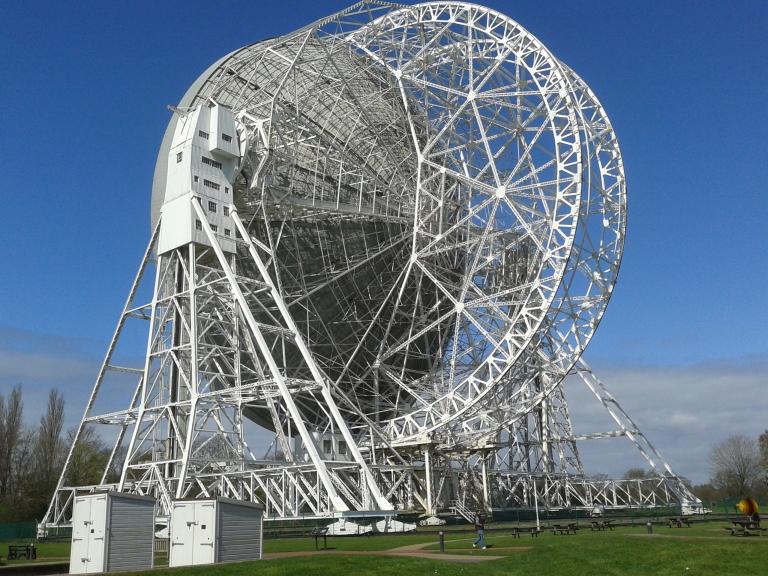